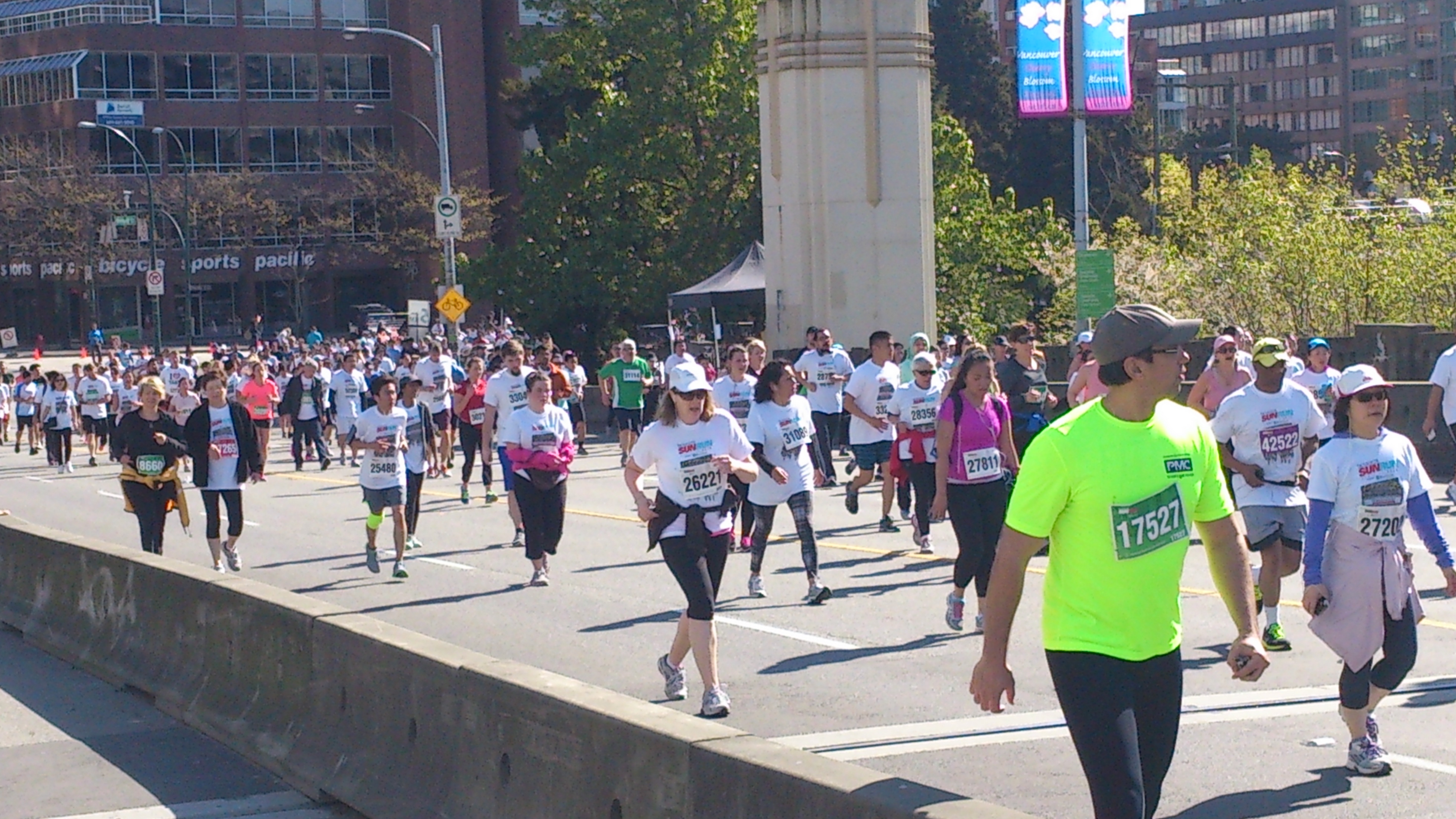 I walked over the bridge toward church yesterday with hundreds of half-marathon runners on my right. It was 9:30 a.m. and already hot. As usual with this sort of thing, there were a few observers gathered on the sidelines clapping and cheering and calling out encouragement. But there was one supporter who stood out. As the runners ran past him, uphill, many of them used a little extra breath to call out their thanks and blessing to him. Why? He knew that on a hot day as the runners neared the 19k mark, the best way he could offer support was not with words alone but with a spray bottle full of cool water, spritzed in the face of any runner who nodded their desire.
As I watched, the grace in the picture brought tears to my eyes. Around this time of year I often find myself weary. I’m there again. The year was busy, crescendoing to a climax in late spring, and I’m grateful for a bit of in-between time, a pause before new deadlines settle in. One evening last week I sat journaling my prayer for this summer, knowing that I need deep rest but not feeling entirely sure what the specifics might look like. What rests me deeply? I know the core of the answer: the kind of deep rest I crave can only be found in the arms of the One who calls all who are weary to come, promising “and I will rest you.”1 But I don’t always know the details of how he’ll rest me.
And then as I sat, bringing my weary self to Jesus to be rested, I realized he was (yet again) ahead of me. Even before I had fully recognized my fatigue and had come asking him to rest me, he had noticed my weariness and was gently guiding me toward simple understandings and practices that open me to him in my weariness and help me—body, soul, and spirit—to rest. Before I reached the 19k mark, he was already there, ready and waiting to offer the refreshment he knew I’d need.
He’s nudged me toward the habit of taking my lunch outside to eat, pausing to feel the sun and the breeze and breathe deeply of the goodness of my Creator.
He’s kept summoning me back to remember many times a day, “This moment is a gift from the One who loves you.” That one reminder alone, as it draws me from my preoccupation with the past or the future and settles me into the present and into his love goes far, far, in refreshing me.
He’s brought alongside a couple of companions who, through their written words, are helping me settle into rest: Ted Loder’s Guerrilla’s of Grace, and Emily P. Freeman’s Simply Tuesday: Small-Moment Living in a Fast-Moving World. Just a page or two or three of either of these books feels like cool water spritzed gently on my tired, overheated self. I read and I feel myself breathe a little more deeply. My shoulders relax. Sometimes there are tears of relief and rest.
And then within two weeks two people said more or less the same thing to me in two different contexts and about two different issues: “Seems like your own David and Goliath story. Time to take off the armor and pick up the stones.” I hadn’t thought about the David and Goliath story in a long time. And if I had, I think I’d have written the headline for the story as “Small guy beats big guy through God’s strength,” or, to paraphrase Jesus’ promise to Paul, “My power is made perfect in weakness.” The bit that God seems to be wanting me to notice now is the way that happens. Middle-sized guy (the king, the supposed expert in fighting such battles) tries to get small guy to wear his armor to fight the big guy. Small guy tries it on and says, “I can’t fight the big guy in this. I can barely move” and takes it off and picks up his slingshot and goes into battle as himself—his small self whose whole trust is in his big God, not in someone else’s armor.
If I’m honest, that part makes me uncomfortable. Some part of me wants to wear someone else’s armor, to hide behind what looks safer, what has been tried, what everyone is doing. (“But all the blogging experts say I should do it this way.”)
But there’s another part of me that’s tired of trying to walk around in armor that is too heavy for me. That part finds hope in this bit of the story. Enough hope to take a good look at what actually works for me, at who I am and who God is and what he might have suited me for, and to begin stripping off the armor and laying aside plans and protocols and expectations that might fit someone else perfectly but that leave me unable to walk. Stripping off those expectations, that part of me realizes I can breathe again, and wants to sing and dance and shout for joy as I realize all over again, and more deeply, that God actually likes the way he’s made me, that he actually wants me to be me and not someone else, that he really means it when he says, “If you’re tired of carrying burdens that are too heavy, come to me and learn from me and take up the yoke that I’ve made for us to carry together. The only burden I will put on you is one made to fit you, one designed for us to carry together, not one that was made for someone else and will chafe your shoulders and rub you raw” (Matt 11:28-30 paraphrase).

1As I’ve often heard Darrell Johnson say, and have written here before, the English translation of Matthew 11:28, “and I will give you rest,” is the best our language can do to translate what the original Greek actually says, “and I will rest you.” Rest is something Jesus does for us and to us as we live in him, not a “thing” he gives us to take away and do ourselves.

When a door is open