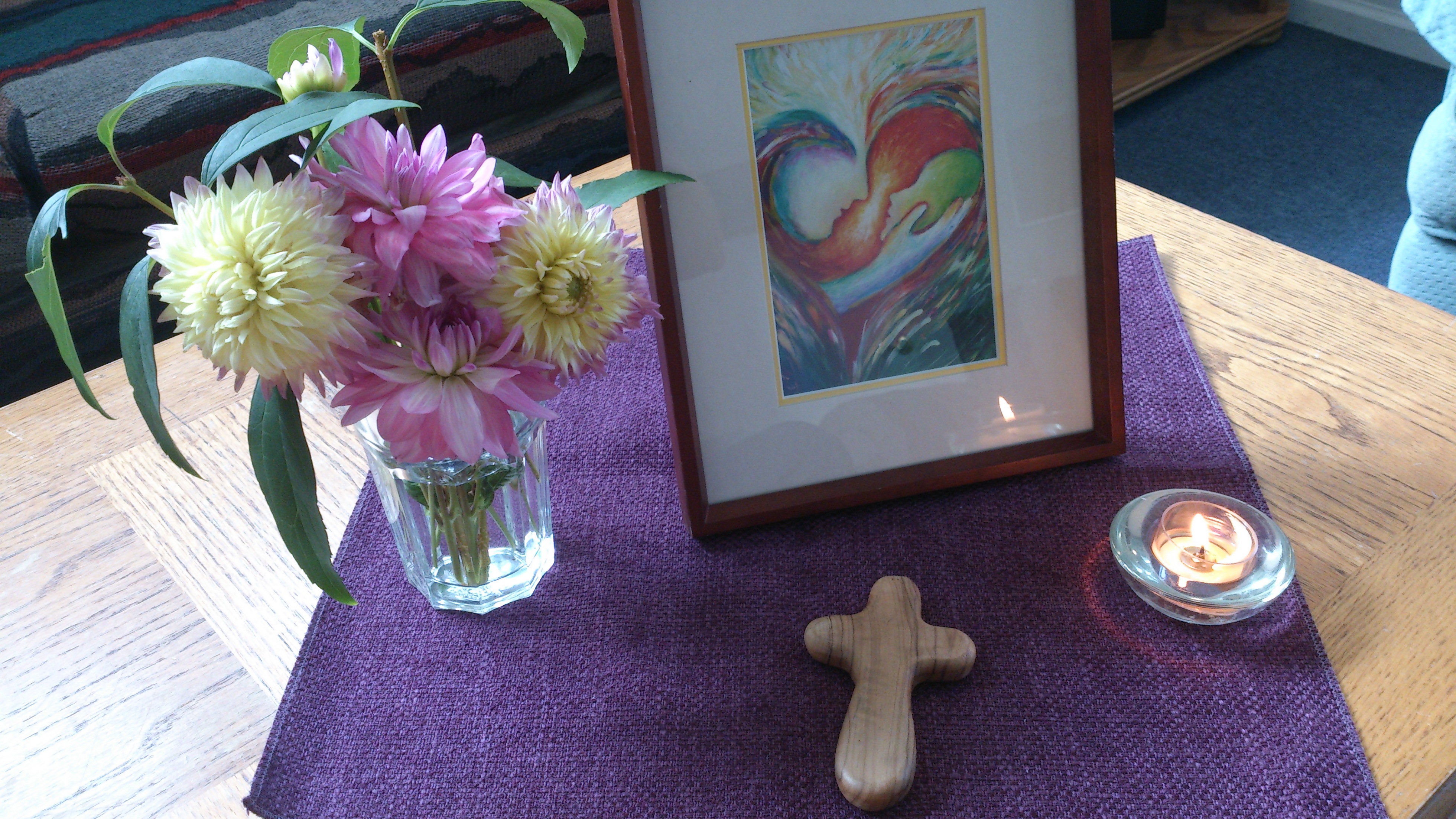 I walked into the room and sat down in a comfy chair across from my spiritual director. The table next to us held a glass of fall flowers, the small cross that I love to hold, and, behind the candle, a small, colorful painting.
I almost always love the way my spiritual director arranges the physical space for our times of listening together. The colours, the ways the various items offer reminders of life while holding space for needed lament, and the reminder of the presence of Jesus in the midst of it all—together they offer a hospitality that helps settle me and open me up to God. But (confession time) I used to groan inside every time my spiritual director chose to use this particular painting as part of the arrangement. I couldn't look at it without recoiling from it. I didn't want to look at it long enough to try to understand it. I didn’t say anything. I just looked elsewhere to avoid what looked to me like a red misshapen face or a miscarried fetus, a small green face layered with distorted orange-red like a frightening Halloween mask. I quietly wondered what beauty my gentle spiritual director could possibly see in such a fearful image.
But this time, instead of turning away, I found myself turning toward it. I'd begun to notice the change in me the last time she displayed the picture. That time, instead of focussing on the fearful red, I'd seen, instead, the white face, quietly attentive to the small one. I hadn't spent long with the image that time, but this time those beginnings of different seeing drew me in so I could hardly take my eyes from the picture. This time, as I struggled to find words to tell my spiritual director about an experience in which I'd found space to be myself and had felt loved, I ended up motioning toward the image and saying, “It was like that. Safe.” Now the image showed me the most tender scene I could imagine—the larger person with the white face holding the small one, offering a calm, steady gaze in which the child could begin to learn that she existed and mattered, and was seen and loved and safe. This time, instead of turning from the image, I turned again and again toward it, hungry for the gentleness it portrayed, and aching to feel once more the hand cupping my head and see the face that never leaves or looks away but keeps steadily loving, quietly holding me in being and making me who I am.


At first, I was so absorbed by the beauty of the interaction that I didn't look at anything other than the faces. I kept turning to see that white face tenderly looking at me, the hand cupping my head. But later, as I looked again at the painting, another surprise was waiting. The red that I'd first interpreted as death and distortion was, in fact, a heart—the life-giving love that filled the relationship. It wasn't the love that was distorted. It was my seeing. And once my eyes were taught to see, I didn’t want to stop looking.
I could also now see, and delight in, the mystery in the painting—the flowing, fiery colors shaping themselves into the heart that frames and sustains the interaction. This is not a love that I can create or control, or even fully understand—and that is part of its beauty. It’s vast and wild and tender and freely pouring itself out to me, and never going away.
I wish I could find the words to do justice to a book I read this summer that offered me a fresh glimpse of this tender, fiery, mysterious love that takes my breath away with its magnificence. The book is called Cross Vision: How the Crucifixion of Jesus Makes Sense of Old Testament Violence, and in it Gregory A. Boyd reminded me of something I already knew: Jesus is the perfect revelation of God—a God who loves so deeply, and is so committed to our freedom and flourishing, that he stoops low to be in relationship. That relationship includes meeting us where we are and willingly bearing our sin as he not only acts toward us but lets us act on him. But God's willingness to stoop and let people act on him did not begin with Jesus. All through the preceding history, God stayed in relationship with his people, continuing to love even when they saw him through dim eyes and could only understand his character in light of their culture around them. Like a parent with a tiny child, God let himself be understood in the only ways the child could understand him at that stage, and slowly, as the child grew, continued to reveal more and more of himself. There is no other way for a child to learn, nor, for that matter, for anyone to learn the heart of another. We have to start from what we know, and slowly, with experience, grow deeper into the truth.

. . . God has always revealed his true character and will as much as possible while stooping to accommodate the fallen and culturally conditioned state of his people as much as necessary. In his love, God was willing to allow his people to think of him along the lines of an ANE [Ancient Near East] warrior deity, to the degree this was necessary, in order to progressively influence them to the point where they eventually would be capable of receiving the truth that he is actually radically unlike these violent ANE deities.
. . . [B]y making gradual changes, God beguiled his people into the gospel, wherein it was revealed that God would rather be killed by enemies than kill them.” (Cross Vision, 73-74)

And so we are invited to look and keep looking into the face of love which is gazing on us, and to slowly learn to see there both who God is and who we are.

Now the Lord is the Spirit, and where the Spirit of the Lord is, there is freedom. And we all, who with unveiled faces contemplate the Lord’s glory, are being transformed into his image with ever-increasing glory, which comes from the Lord, who is the Spirit. (2 Corinthians 3:17-18)

And now, may we each live in the blaze of this blessing which God himself commanded his priests to pronounce so that his people would always know that the face that looks upon us is one of blessing and grace and generous peace.

“The Lord bless you

the Lord make his face shine on you

and be gracious to you;

the Lord turn his face toward you

and give you peace.

4 thoughts on “Learning to see”