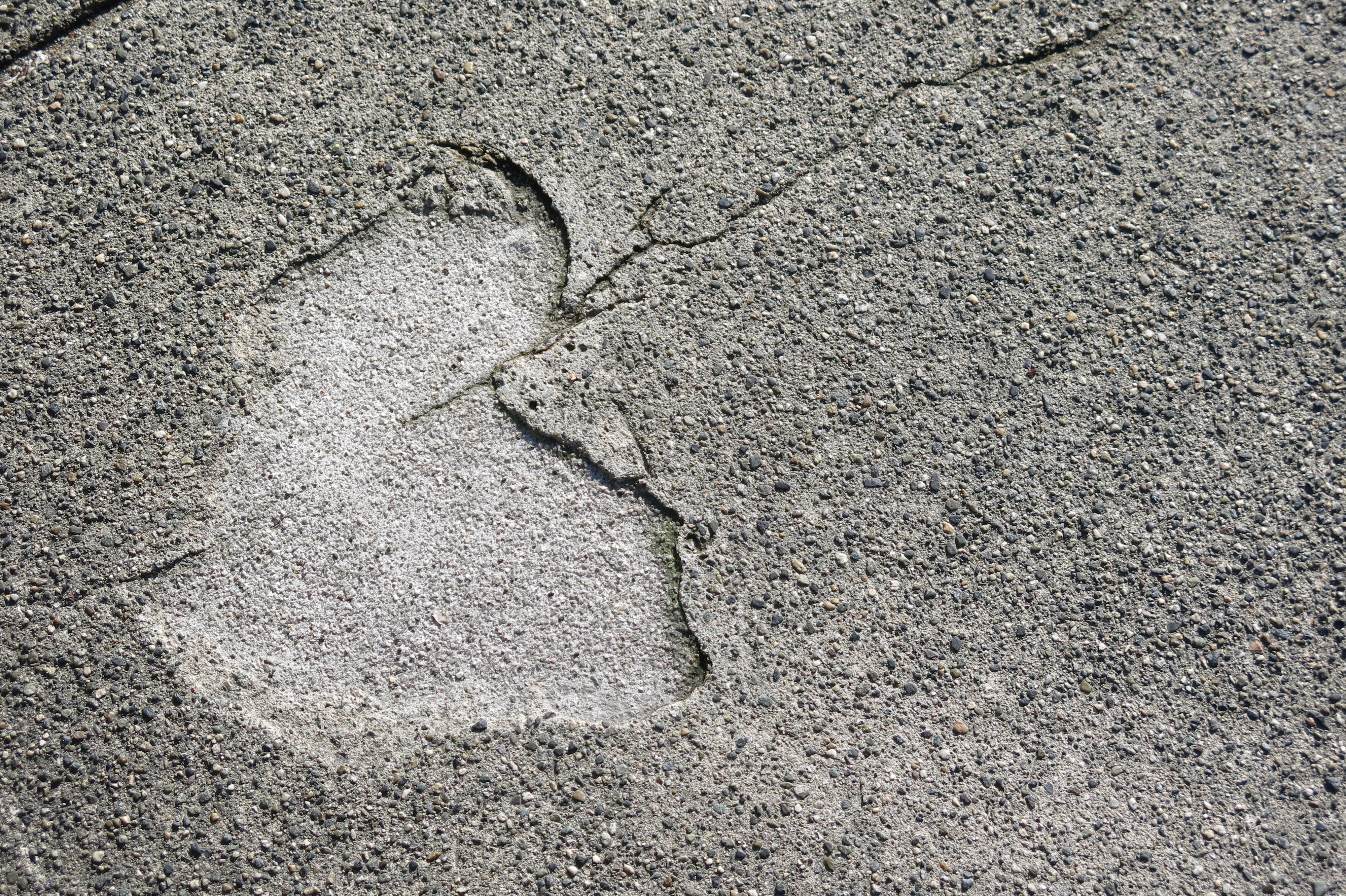 There it is, chipped right into the stony sidewalk, the reminder that sometimes God’s love comes in the form of a breaking, His “yes” spelled out first with the letters n-o.

One of God’s great men said it this way:

“God is sufficient for God’s work.

God chose me because I was weak enough.

God does not do his great works by large committees.

He trains someone to be quiet enough and little enough, and then he uses him.” (Hudson Taylor)

But for all the demons cast out and sick people healed, it was the thud of stakes pounded through flesh into wood, the gasp of one more lift of the raw back against rough timber that heralded the greatest victory.

In these five years, I’ve not felt freedom to ask for physical healing. Part of it has been fear; an equally true part the sense that God has been saying, “Let me be enough.” He had made it clear: He alone was to be the focus of my desire; I could trust Him to choose for me what was best. “The LORD is my chosen portion and my cup; he holds my lot.” (Ps 16:5 NRSV)

So I haven’t asked. Not for that. Until last week. Then a dream and a prayer and I sensed Him say, “Ask me.” He did not guarantee the outcome, just invited the request. I let it sit for a few days, getting used to the idea. Then one day, “Arise, my darling, my beautiful one, and come with me.” (Song of Solomon 2:10) They were the same words he spoke the morning I first flew to the little Afghan village that would be home for 4 years. This time, I could picture His laughing eyes, hand held out, eager to take mine and run together who knew where. I danced through the day (- it is quite possible to dance and nap at the same time -), holding tight to His hand. Being all His. Just wanting Him, wherever He led me.

As I rode the bus to the Regent College soaking prayer evening, I wondered if this was how other women felt in the moments before their wedding. Not knowing, really, what lay ahead. Just so eager to be more completely His than ever before.

As we began, the worship leader spoke, “We like to nuance things at Regent. And most things need to be nuanced. But this one thing does not need to be nuanced: God is love, and God is for us.” We sang for an hour, every song a celebration of God’s love. For that hour, I was free like never before to enter into worship; free and unafraid. His. Nothing held back.

We entered the hour of silent prayer supported by gentle instrumental music. There in His presence, I sensed the answer. I’m not sure if it was “not this” or merely “not yet,” but it wasn’t “yes, this, now.” A few tears slipped from my eyes as I felt Him hold me tighter and whisper, “I know, my love. I too have asked and been told ‘no’.” Later He added, “But I was only told ‘no’ so I could be given you.”

I left still feeling like I had been to my wedding. I felt myself held closer that night. I had been denied physical healing, but what I really wanted had been given: the opportunity to give him a more complete “yes,” and to receive more fully his giving of Himself to me. “For richer for poorer, in sickness and in health.” Whether He chooses to provide for me through disability insurance or gives me a way to earn a living, whether he continues to walk with me through illness or brings me, sometime, into greater health, these things are certain: I am my beloved’s and my beloved is mine. He is love, and He is for me. And nothing can separate me from His love.

And in those moments when I feel too weak for the task, He reminds me:

He gained me not by becoming stronger but weaker, not by stepping out of the struggle but by entering it so deeply that it broke Him. The whip, the nails, my sin crushing his groaning heart and burning lungs and flesh that screamed for relief: it all killed Him. But it didn’t conquer Him. He chose. He said “yes” to His Father even when His Father said “no” to His request to skip the cross.

I guess He knew that God only ever says “no” to say “yes” to something far better.

Free to be human without fear