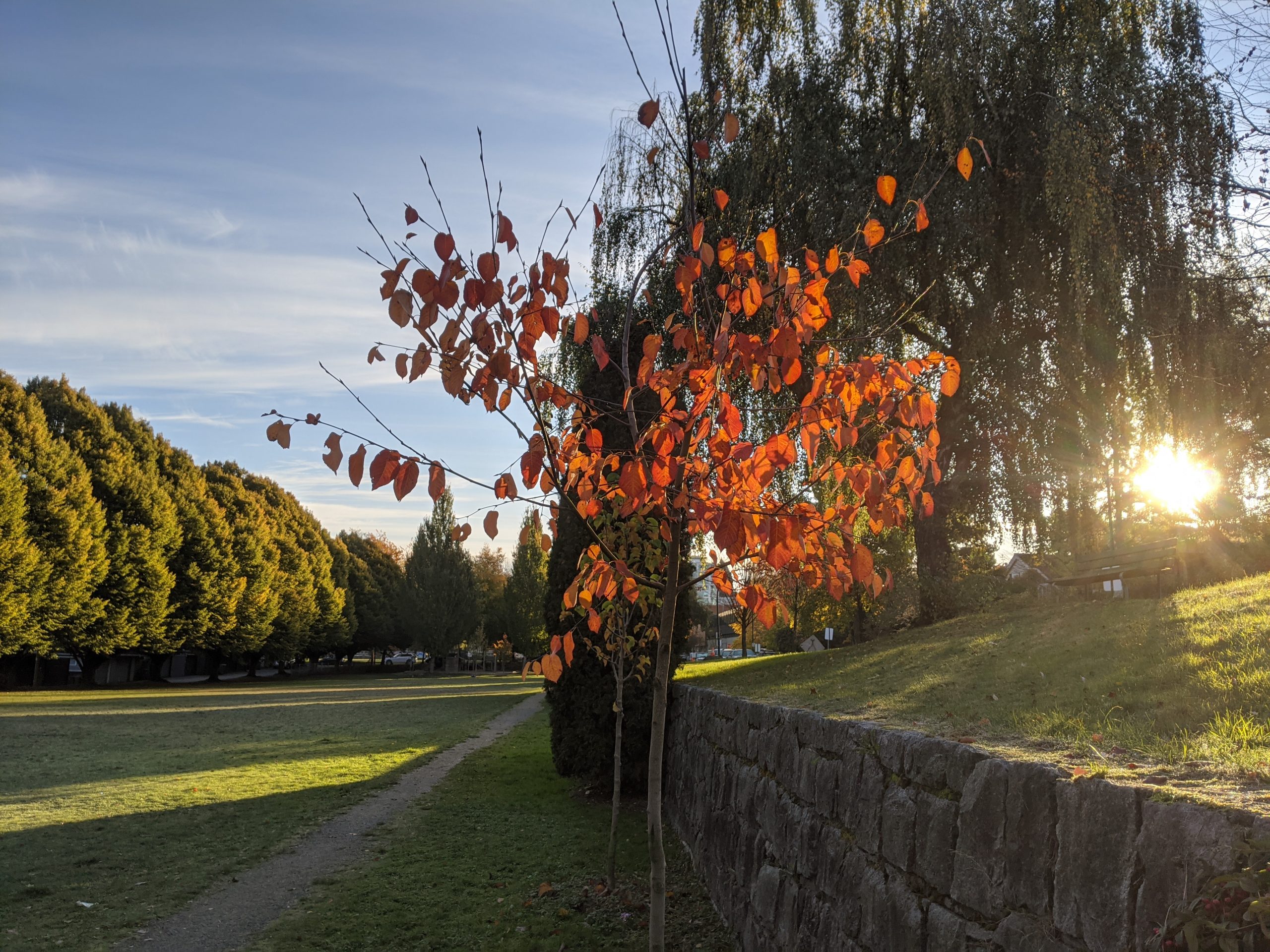 The night is beginning to slip away and dawn lift her head as I tie my sneakers and head out into the morning. It smells like winter, and when I step off the sidewalk to give social distancing space to another, the frosty grass scrunches under my feet.

As the light lifts, the colors of the trees come into clearer focus: fiery red, gentle peach, yellows that range from pale and almost translucent to burning gold. Many trees still cling to their summer green, and I’m surprised to see the spring green growth of newness still topping one hedge.

The best of all the seasons seems rolled into this day, reminding me that as each season rises and falls, it holds within it fragments of the last that still linger, as well as seeds of the season to come. Fall isn’t just fall: it’s remnants of summer and a taste of winter and even a promise of the spring beyond, as well, of course, as its own beautiful self.

Seeing them all rolled into one helps me see this too: Every season has its beauty, if I know where to look. And often where to look is beyond my pre-formed ideas and expectations and into the truth of what is.

The times I most need to look up, or look deeper, or look differently—or maybe just trust without being able to see—are often the moments it’s hardest to do just that. Disappointment and doubt can keep me looking at what isn’t rather than what is. A Messiah on a cross? A call that ends in illness?

But trees know this well: Death (of a body, a dream, a season) can be a vehicle for glory, a reaching up in surrender and worship, a pouring out to pave the way for others.

They know this too: Death isn’t the end. What looks and feels like death is often the planting of a seed, necessary preparation for something new.

To say it differently, in Christ, every death isn’t finally death, but a doorway.

Call me strange, but when I think of death and seasons I also think of the desert. The desert is often stark and desiccated, a place where death threatens in a way that can’t be ignored as it can when we’re lying on lush grass under a strong oak listening to the lullaby of a nearby stream. In my mind, the wilderness is more than a place. It’s also a season—a time, perhaps, when hours stretch wearily into the distance like sand unbroken by an oasis. A time of feeling small in a vast unfriendly space. A time when the realities of life and death can feel as stark as black shadows on burning sand.

Someone reminded me recently how many of the great fathers of our faith spent prolonged time in the wilderness—physical and/or metaphorical—between the time they were chosen and the time they stepped fully into their leadership.

Moses spent “a long period” tending sheep in the desert before leading God’s people out of Egypt (Ex. 2:23).

David was anointed as a teenager but didn’t step into his kingship until age 30 (1 Sam 16:11, 2 Sam 5:4). Most of those intervening years he ran through the wilderness, hiding in caves from his predecessor, King Saul.

Joseph and Daniel both faced forced migration and time in jail on trumped up charges—only Daniel’s captors didn’t settle for an empty prison cell, but chose a flaming furnace followed by a pit of starving lions.

The trend carries on through the New Testament part of the story with Jesus, who not only spent his first three decades in relative obscurity, but as soon as he was publicly anointed and commissioned for ministry was led by the Spirit into the desert (Luke 4:1).

And between murdering Christians and becoming a missionary pastor, the apostle Paul spent three years in the Arabian desert and Damascus listening to God (Gal 1:11-24), and then another fourteen before he was fully accepted and affirmed by the apostles (Gal 2:1ff).

It might not be too strong to say that a key step towards godly leadership is always a stay into the desert. And sometimes the lingering is long. 40 years for the people of Israel.

When we’re in the wilderness it might feel like the end of the story. But for those in Christ, “My God, my God, why have you forsaken me?” always leads, whether in this life or the next, to “Peace be with you,” and “Why do you seek the living among the dead?”

When God calls, he doesn’t guarantee that the way will be smooth or that the stops along the way will neatly fit our expectations. He does, however, promise that he will be with us, that the hard times will pass, and that the ending will be good—far better, in fact, than anything we can ask or imagine. We just might have to wait a while.

So when the question comes, “Is it safe to trust God’s love?” my heart’s answer is now an unreserved, “Absolutely.” And “What do you mean by safe?”

Finding our place in his story

Three Gifts We All Need for This Season