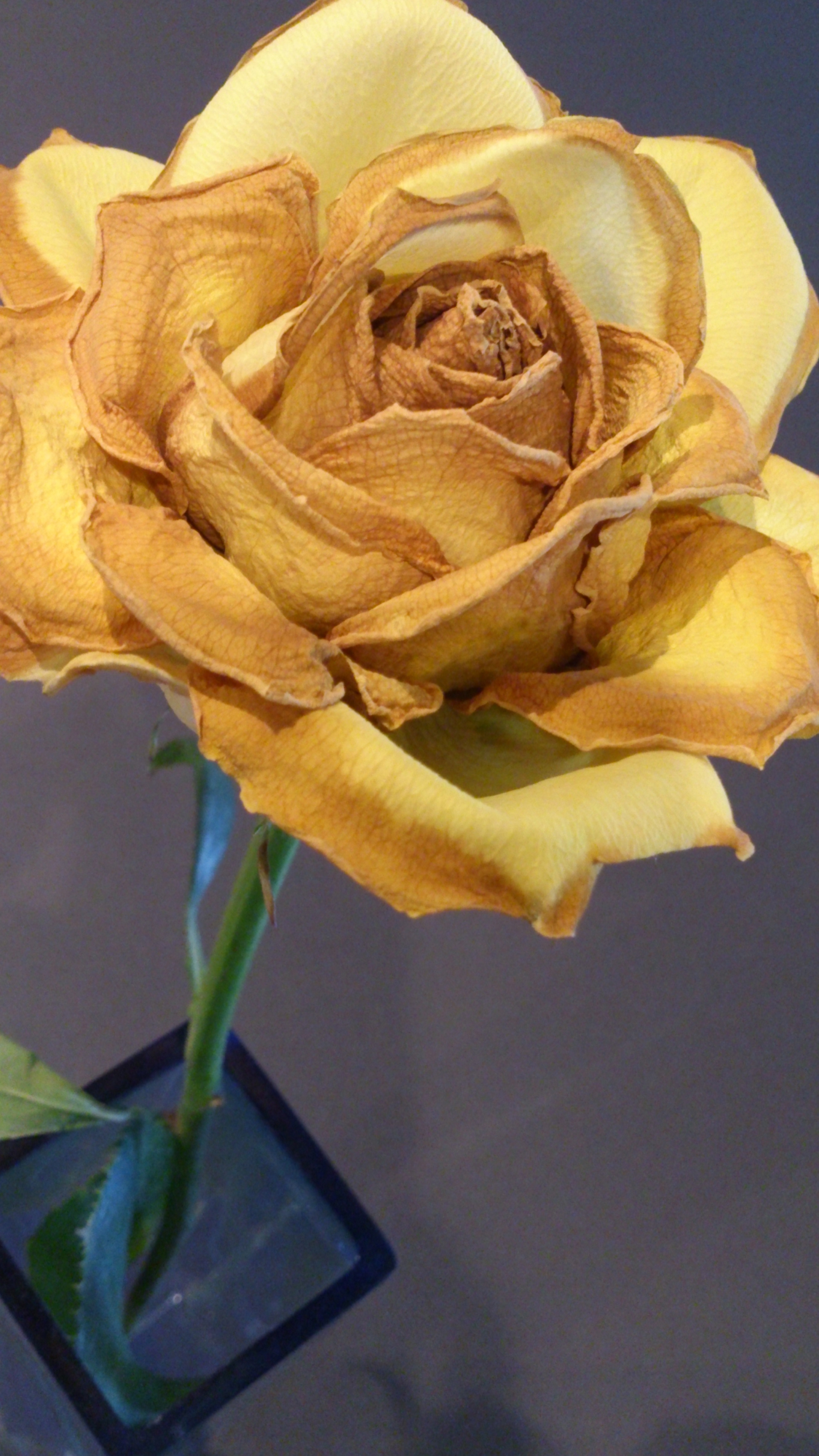 Twenty-three days ago, a friend who came for dinner brought three yellow roses. Two aged as expected, their heads drooping after seven or ten days, begging to be laid to rest. The third chose a route I’ve never seen before, its face straight up as though transfixed by the light, still standing tall and strong while age continues to creep in from the edges, crisping its petals from a silky baby yellow to a richly veined gold.
It makes me think, somehow, of my Grannie whom I watched deepen in grace through her eighties. Just a few days before she died, less than two months short of her ninetieth birthday, she wrote in her Bible next to Luke 2:25, “New Year’s resolution: everything for God.”
Rob Des Cotes often used to ask young people with whom he was walking what kind of old person they wanted to be. He encouraged them to start preparing now for the kind of person they want to be then because the journey to the character of a wise elder consists, as Eugene Peterson so beautifully described it, of “a long obedience in the same direction.”
I’m not so young anymore but I’m not old either and I’ve been considering Rob’s question this week as I’ve been drawn again and again to the words of Pierre Teilhard de Chardin, SJ. I read them first punctuating a fellow pilgrim’s blog post. I posted them on facebook, wrote them in my journal, began to memorize them: “Above all, trust in the slow work of God . . .”1
What kind of old person do I want to be? I want to be characterized by what Paul said is “the only thing that counts”—“faith expressing itself through love.” (Gal 5:6) I have a long way to go. But I have realized that each time I come face to face with my own inadequacy or fear or sin, I am given a chance to develop the character I want. I can focus on my failures (which leads me away from faith and love into self-condemnation and a drivenness born of a desperation to make myself lovable) or I can focus on the gentle, ongoing work of God. Actually trust it. Not just bemoan its slowness, post the poem on my bathroom mirror, or write it in my journal. Trust in the slow work of God. Lean my weight on it. Tie my hope to it. Look at Jesus again and again and see him loving me. Linger in one of the images of surrender I wrote about last week, knowing myself embraced, carried, cared for rather than conquered. Get up and go out in the sun to reach between the thorns and pick, one by one, the graces that hang ripe and juicy and sweet on the vines, begging to be brought home and savored and shared.
Trust in the slow work of God: It seems a slightly altered echo of the words I’ve been hearing for weeks, “Carolyn Joy, let Me be God.”
God’s work is slow. I wonder how many of the graces that I saw grow in my Grannie in her eighties she had asked for in her forties, or in her teens? And God’s slow work is beautiful. I see Grannie again, sometime in her last few years, setting aside her proper British upbringing with a chuckle and a glint in her eye to lick her dessert plate in response to a dare. I want to be that kind of young old person—the kind with soft baby yellow peeking out between deeply-veined gold, the kind with increasing freedom and playfulness born of opening to love and choosing again and again to trust God’s slow work.
Above all, trust in the slow work of God. I can because, as the apostle Paul assures, “there has never been the slightest doubt in my mind that the God who started this great work in you would keep at it and bring it to a flourishing finish on the very day Christ Jesus appears” (Phil 1:6 The Message).

1Here, for the curious among you, is the rest of the poem I’ve been savoring:
“Above all, trust in the slow work of God.
We are quite naturally impatient in everything
to reach the end without delay.
We should like to skip the intermediate stages.
We are impatient of being on the way to something
unknown, something new.
And yet it is the law of all progress
that it is made by passing through
some stages of instability—
and that it may take a very long time.

And so I think it is with you;
your ideas mature gradually—let them grow,
let them shape themselves, without undue haste.
Don’t try to force them on,
as though you could be today what time
(that is to say, grace and circumstances
acting on your own good will)
will make of you tomorrow.

Only God could say what this new spirit
gradually forming within you will be.
Give Our Lord the benefit of believing
that his hand is leading you,
and accept the anxiety of feeling yourself
in suspense and incomplete.”

excerpted from Hearts on Fire

A Time to Play